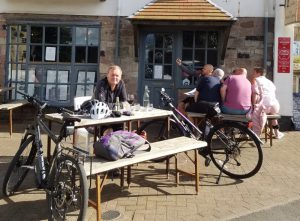 Well, despite the picture above, I haven’t been doing much lately, so no update to johnsunter.com

To be honest I’ve been feeling a bit down. I’ve always suffered with seasonal effectiveness disorder and now a 2nd Covid lockdown has just made me even more miserable.

No adventure on the horizon (well none that definitely won’t be cancelled) and I’m drinking a bit too much. 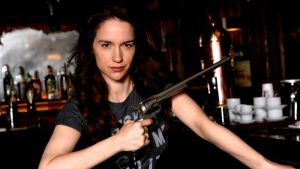 My meet up with Nick yesterday ended up being cancelled (a bit disappointing really and since Manchester is going to be imminently, fully locked down, I don’t know the next chance we’ll get to do it).

On the plus side, I’ve started watching loads of new TV stuff – Wynonna Earp, The Umbrella academy and Star Trek Discovery

If you have young children, I highly recommend the Disney live action drama Mulan. I watched it with our freinds daughter Amy and she really enjoyed it.

I went to see True Romance and have dinner at Chez Jules (for several years we didn’t have a cinema in Chester, so a local restaurant stepped up and started showing films).

Have seen a few things at Storyhouse cinema, including Capital, Ford v Ferrari and A life on our planet with Sir David Attenborough. 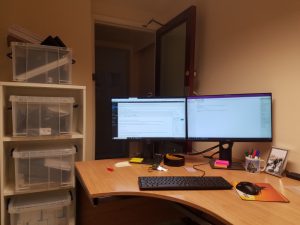 Things at work are going well (I haven’t missed a days pay throughout this nightmare, and were busier than ever) I suppose I’m due some good luck after the events of 2009.

I even have my own modest office now (it’s early days, but I have great plans for this place 🙂

Really struggled to get back into a routine when I returned to work (3 days a week, Wed & Fri at home).

I started using a daily checklist, inspired by the book checklist manifesto which I highly recommend. 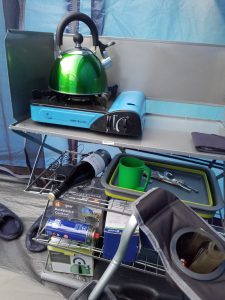 A couple of things have worked out this year.

We went camping to Beddgelert. A very “keystone cops” affair, as we arrived at the campsite on Friday evening, and it had closed down.

After about an hour, I realised that we were booked into another campsite, 2 miles away (the one we’ve visited before and really like had closed down. I couldn’t remember it’s name so just googled Beddgelert campsite, it pointed me at the other one and I’d booked it). 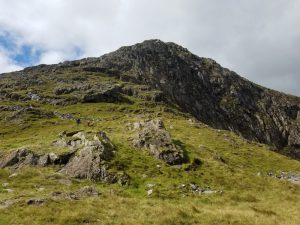 Anyway, we ended up having a really good time and among several day walks, completed Moel Hebog up the hard route. 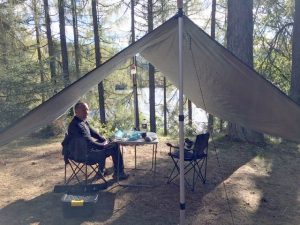 Speaking of camping, my old friend Caz showed me this rig he’d set up (and which I’ve now bought myself).

Basically, 2 telescopic poles, a 3 meter by 3 meter waterproof sheet (in the army, referred too as a basha) and plenty of para-cord.

A simple concept, but it revolutionises minimal camping. In younger days, while camping, you would sit out in the evening, but if it started raining you’d retire 2 to a tent and the social aspect of the evening would sort of end.

If we’d had one of these, we could have stayed up all night 🙂 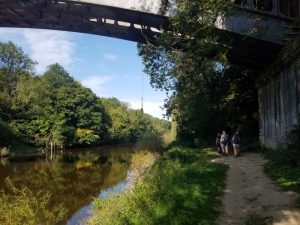 On another weekend away (all together, I was away from home for 6 consecutive weekends) we visited Iron-Bridge Gorge.

It was organised by the excellent Brian from the Walking Group (the walking group isn’t operating officially at the moment). We ran an off book trip to Iron-bridge Youth Hostel and booked the whole thing (we had a room each :).

Lots of fun walking days. I think next time I’ll also rent one of the Canadian canoes they have under the bridge. 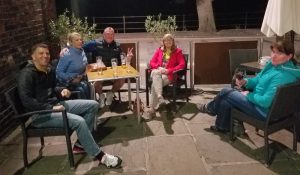 In the evening, we enjoyed some nice food and good company. 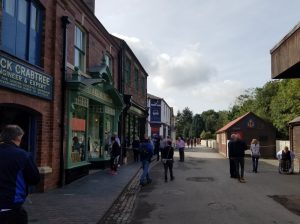 I also got to spend a day at Blists Hill Victorian town.

It was a literal recreation of a Victorian town. It was enormous and had loads of costumed actors and people demonstrating steam engine’s and stuff like that.

The search for adventure continues… although it feels a bit more difficult than usual at the moment.

One thought on “Dark nights but upbeat about the future.”