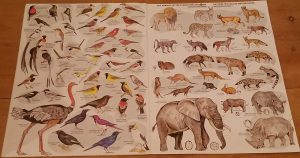 Nikki got me a book with pictures of all the animals in the Etosha national park and I had great fun ticking off all the one’s I saw. 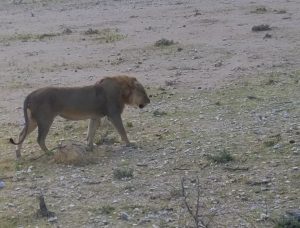 Although all African animals are special, it’s the cats you really go there to see (and that means getting up early).

The park rules around viewing the animals were very strict.

The truck was only allowed to go a certain distance from the animals and when an American group in their own vehicle got too close the park rangers intervened. 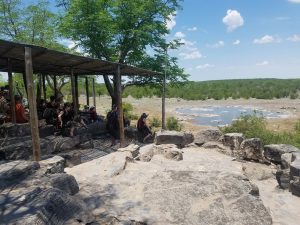 After the luxury of our previous accommodation, we’d now be staying for 2 nights in the state run Safari Lodge in the park.

The surroundings were superb and it was an excellent base to explore the park.

The service levels however were another matter. They didn’t cater for vegetarians for example, and simply buying tickets for a night safari was like getting tickets to the FA cup!

I visited this waterhole to view animals and didn’t see a single thing (although it was a nice place to sit). 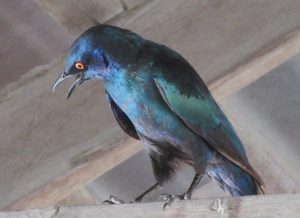 Another lunch cooked at the camp by Wendy and while relaxing (which means while I was having a beer) I saw this colourful Starling waiting to snack on our leftover food. 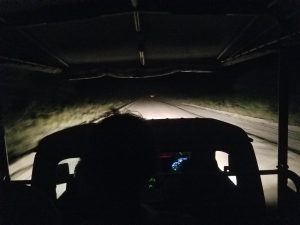 We head out on a night Safari. 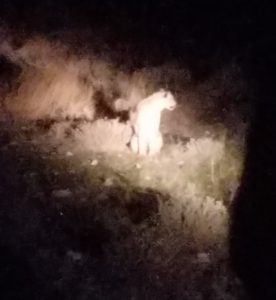 We saw loads of animals on the night safari, my favourite was this Leopard. 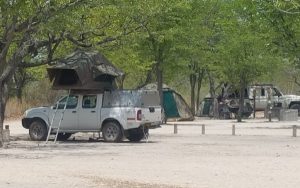 Breakfast time in the camp the following morning and I go for a walk around.

Some people were unlucky enough to have tents, but we had a chalet.

I would have traded a night in our chalet for a night in this vehicle I saw, which had a sort of roof top shelter for sleeping in. 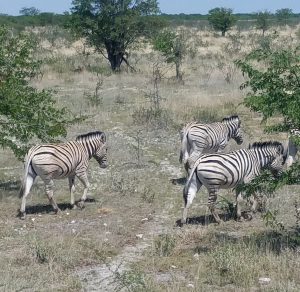 During one of several game drives in the park, a dazzle of Zebra (yes, that really is the collective noun for Zebras). 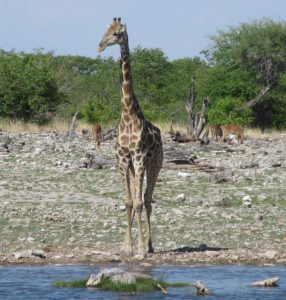 And the ubiquitous Giraffe – the lighthouse of the bush. 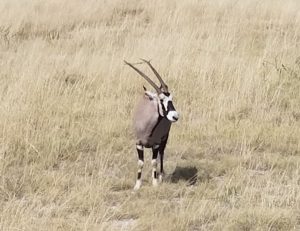 Not as exciting as the cats we saw, but the Oryx really is a beautiful animal.

After an amazing few days in Etosha, it’s time (sadly) to leave.

But we haven’t seen the end of wild animals. 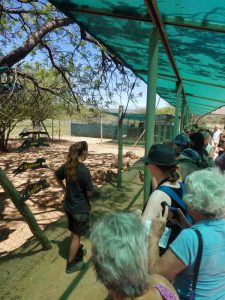 We visit the world respected Cheetah conservation fund, a sanctuary with literally dozens of Cheetahs.

The park is run mostly by volunteers and their main source of income is providing dogs for local vilages who bark at Cheetahs to make them leave the livestock alone.

This means the local villagers don’t need to shoot the Cheetahs and the system works for everyone. 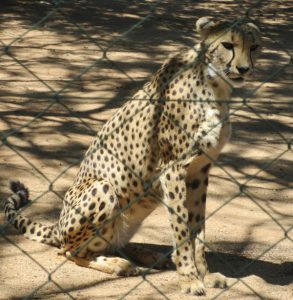 The Cheetahs were spectacularly beautiful animals. 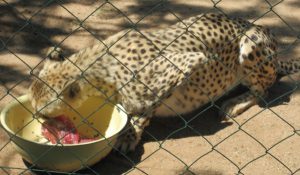 Unfortunately, if a cat finds its way to the centre, before its parents have taught it too hunt, the professionals there are unable to assist.

So in this case, the Cheetah will be fed raw meet which it will eat in a bowl. 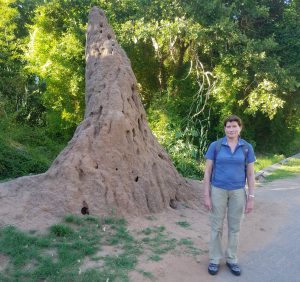 We head to the final stop on our journey, the strangely named Waterberg rest camp. 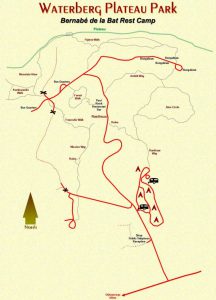 Great thing about the park was the area was full of trails and it was nice to wander around on my own exploring. 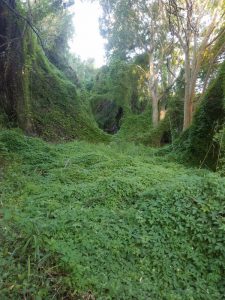 A sort of overgrown rain forest, with wait-a-while vines. 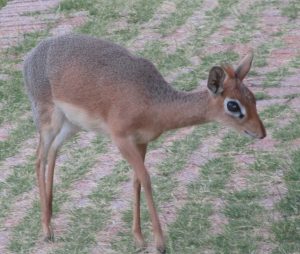 A fully grown antelope, that’s the size of a dog. They were wandering around the camp and weren’t frightened of me at all.

They have one central area where we all congregated for drinks and later dinner. 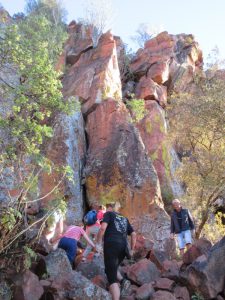 In the morning, were up early and heading up to the Waterberg Plateau.

It took 45 mins to an hour to get up there, but it was well worth it. 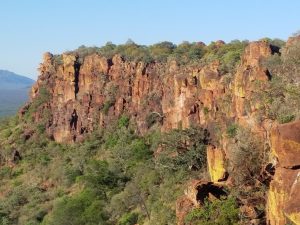 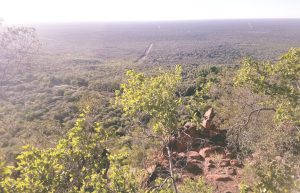 The view from the top, all the way to the Kalahari desert. 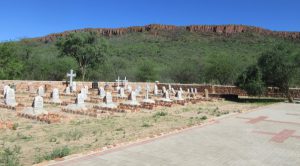 In the morning, more exploring of trails around the park, then breakfast and were heading back to Windhoek. 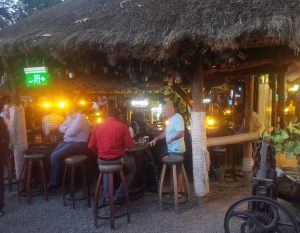 Back at our hotel, we get cleaned up and head out for the groups final evening together at the famous Joe’s Beerhouse. 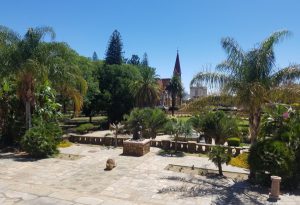 Nikki and I have an extra day booked, so the following afternoon, we have an organised tour of the town.

Above are the government gardens, with statues of various revolutionary leaders. 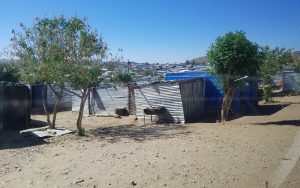 The tour included a visit to a township.

I was surprised that most of the building were made of brick and had schools and hospitals nearby.

I realised that my idea of a township had come from a book based on townships in the 1930’s and 40’s. Our guide explained that things arent like that now and what I was talking about was more like a refugee camp.

But actually recently migrants to the area only have houses made of tin and a stand pipe for water when they first arrive. 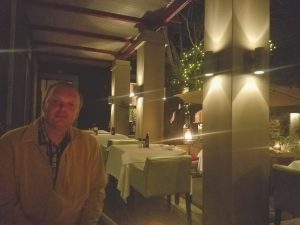 Our final evening in Namibia and we decide on a top notch meal and wine.

Inside, the service food and wine were superb. An evening for reflection and a lovely end to an amazing trip. 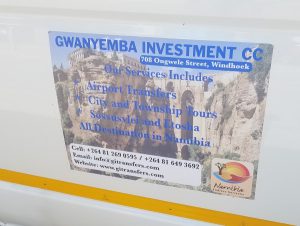 But I had to end with the picture above.

As we got into a taxi to go to the airport, I saw this sign on a tour bus, offering all sorts of day trips.

I almost asked him to take us to that bridge 🙂 except I knew his couldn’t, as its in Andalusia in Spain and a bit far away from Southern Africa.

I’ve been to a lot of places, but Namibia really was amazing.