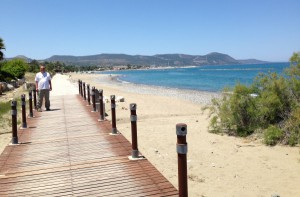 It was Christmas time again, and I’d decided that Cyprus looked like an ace destination. 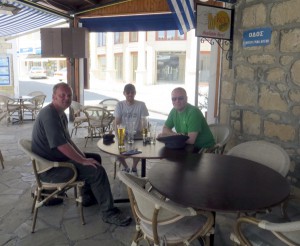 I’d been to Cyprus earlier that year with Dan and Glenn.

With the pressure on at work, I hadn’t properly planned the trip properly.

We’d gone for 2 and a half days, it takes 4 hours to fly there. I worked out the UK/Cyprus time wrong so got everyone off too the beach at 5am, the list goes on.

Despite this, we still had a pretty good time and I saw enough on that trip to know I’d return to Cyprus. 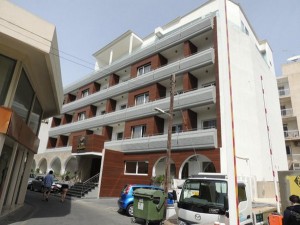 This time I was a bit more organised.

We arrived at Larnaca airport and collected our rental car (we had accommodation booked at the 5 places we’d be visiting through the 8 days that we were there).

The flight was fairly late so we went straight to our hotel, got cleaned up and head straight out for the evening. 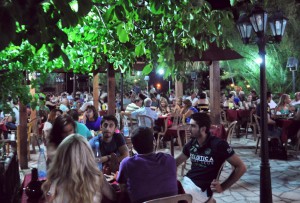 It was a Saturday night and there was a really good vibe.

We had dinner outside listening to a live band and had an amazing evening. 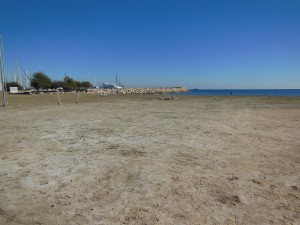 In the morning we wake up full of life, and as the sun is shining, we go for a walk on the beach. 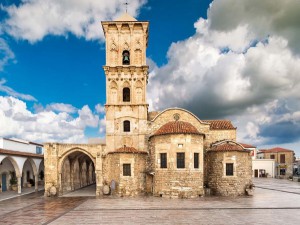 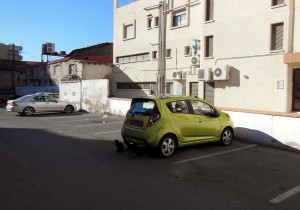 We return to the car park to collect our rental car and head for our next destination, the capital Nicosia.

Money can be hard to come by in Cyprus, so they have even resorted to using cats as a replacement for security guards. 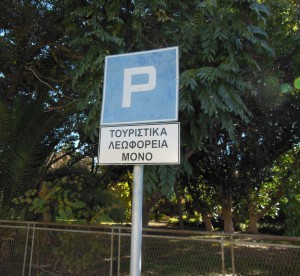 We arrive in Nicosia.

The capital is packed. We end up driving around in circles for ages to find somewhere to park.

We reach an area with loads of empty bays. I take this picture of the sign and we walk a mile back to our hotel.

I show it to the girl in reception and ask her what it says ?.

She smiles and explains that the sign says “coaches only”. We leave our bags, go back to the car and spend another half hour finding a parking spot. 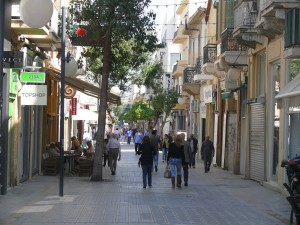 In the middle of the day, the city was pretty quiet, but after lunch it was heaving (but then it would be, it was the last Saturday before Christmas !).

With no clear itinerary for the afternoon/evening we just wander around, relax and have something nice to eat and drink. 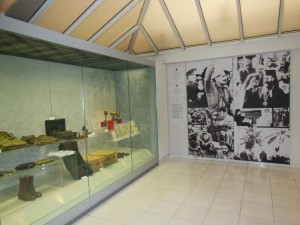 The next day we have breakfast at a streetside cafe and then go out exploring.

Its the day before Christmas eve. As we enter The national struggle museum, the staff there seem startled and delighted that someone has come to see it.

Moreover, since most of artefacts and information are about horrible acts committed by the British and how they were killed by the Cypriots, they seem surprised we’re so interested.

Although we were the only people there, the stuff inside was fascinating and we spent a full 2 hours looking around and reading the articles. 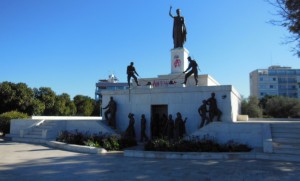 Wandering into town, we pass the Liberty monument. 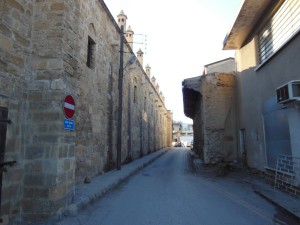 One of the Venetian walls around Nicosia town centre. 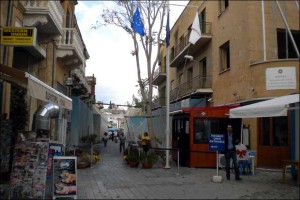 In 1974 the Turkish invaded Cyprus and annexed 8% of the country. The border  runs for 180 kilometres right across Cyprus.

The Green line (as the border is known) runs right through Nicosia and splits it into North and South.

A visit to the North was one of the things I really wanted to do. Nikki cautioned that it was occupied territory and there were ethical issues to be considered.

After a brief discussion, we decide that an hour spent there and a cup of coffee is ok considering its Europe’s last divided city.

We present our passports and are invited in with a smile. 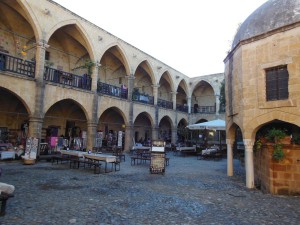 Once in the northern part of Nicosia, everything is much cheaper.

The main problem the authorities have, is nock off sportswear (which was everywhere).

We had a look around, but as so often happens in situations like this, there wasn’t that much to see.

This compound was the most interesting thing we could find, we had coffee and returned to the Green line. 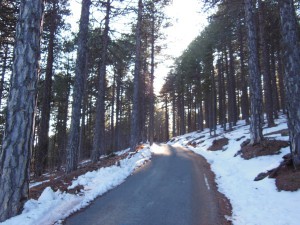 Following day, its Christmas eve and were back in our rented car heading for the Troodos mountains.

It was fantastic to be really warm, yet there was loads of snow on the ground. 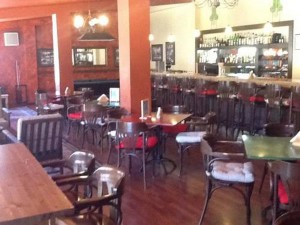 When Nikki and I arrived, they were very welcoming, but they looked at us a bit strange.

Later I realised why. Everyone else staying at the hotel was there with children, parents and grandparents.

They had very friendly staff and a nice bar. My kind of Christmas eve. 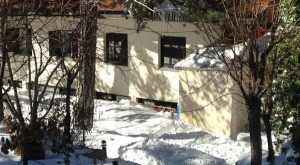 In the morning, all the staff were dressed as Father Christmas and children were opening presents and stuff like that.

We had our walking boots on and we were off to spend Christmas day on the hill doing the Artemis trail. 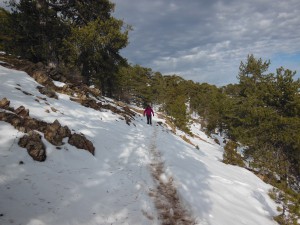 Trekking through a snow covered forest. 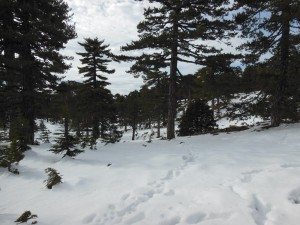 We could see from the snow drifts, we were the first people to walk here since the last snow. 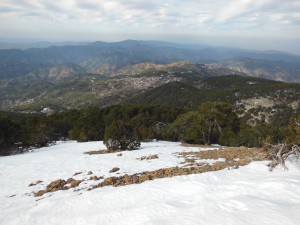 This incredible view from the top of one of the hills.

We got back in time for Christmas dinner and a few drinks. 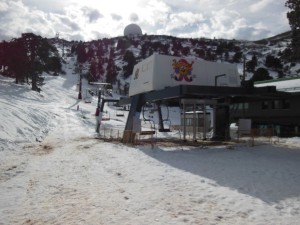 The following day we tried to walk up Mount Olympus.

Unfortunately, the very top is a Radar station, so we couldn’t “bag” the peak (the golfball thing you can see at the top of this picture is the Radar dome). 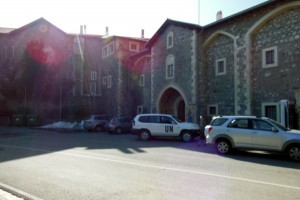 As we leave the Troodos mountains, we stop at Kykkos monastery for lunch.

It looked like some UN staff had taken a day off to visit the monastery as well. 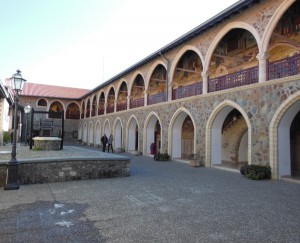 From the outside, the Monastery is in a familiar format. 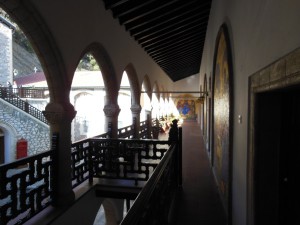 Inside, the monastery has amazing paintings. 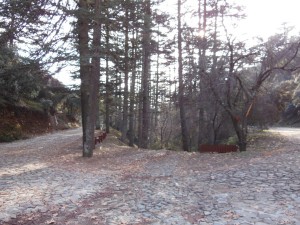 We continue along, flanked by cedar trees. 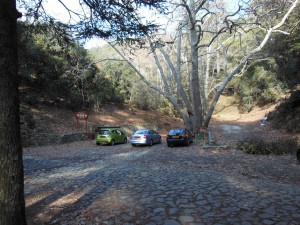 Some other people have the same idea as us, as we park up the car and go for a walk in the Paphos forest.