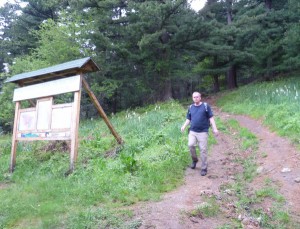 As part of our trip to Macedonia, we decide to visit Bitola and the Pelister national park. 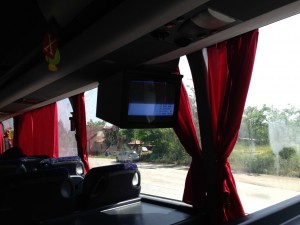 As before, coaches are the main form or travel in Macedonia.

As we climbed on board the coach from Ohrid, I saw a tv mounted on the ceiling above us.

I wondered if there might be a film or something with subtitles for us to watch on the journey.

Unfortunately, it just showed the times of connecting coaches (but wasn’t updated dynamically).

I cant really read in cars and on buses without feeling ill, so ipod, Happy Mondays and I’m back in 1986. 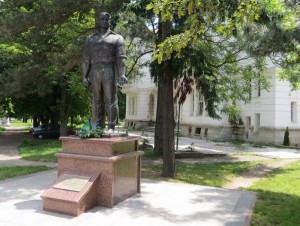 A statue to Stevan Naumov.

Local partisan leader who fought in the 2nd world war. 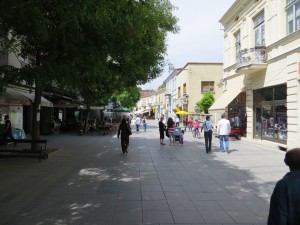 We decide to explore the town (it was lunchtime and our hotel was high in the mountains so unlikely to be much going on there).

We wander along Sirok sokak street. 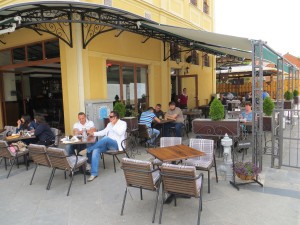 We find this lovely restaurant where we have lunch and a couple of drinks.

The weather is lovely and the people really friendly. 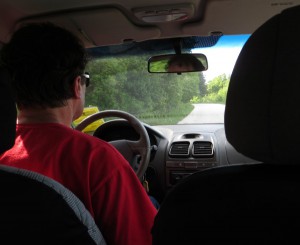 And then were off.

The hotel is 15k from Bitola on a steep windy road, so we take a taxi. 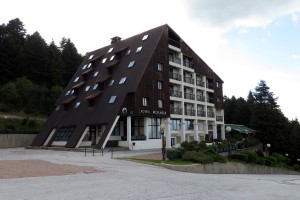 Up high in the mountains of the Pelister national park and originally built in the 70’s for communist party members to go on holiday.

I absolutely loved it here. In the middle of nowhere, it had everything you needed with fantastic country air. 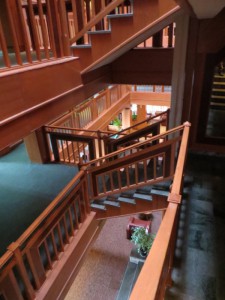 Inside the furnishings were dated, but in perfect condition (reminded me of something from a James Bond film when Roger Moore wore flares).

My favourite quirky thing, was a radio built into the cabinet next to my bed.

It said digital radio. As DAB is a fairly recently thing I thought it must have been refitted.

In reality, it was actually a digitally tuned radio (ie it had red numbers that said 11:52 when you moved the dial). 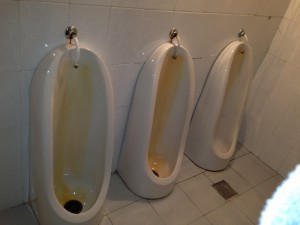 These toilets were a bit strange.

Also, an odd thing with a double bed, but we each had a single quilt and when I asked about it, they said they didnt have any double quilts, but could get me a taxi back to Bitola if I wanted to buy one 🙂

We spend the rest of the afternoon relaxing in the hotel and wandering around outside, checking out the paths and exploring the forest.

In the evening we have dinner and drinks, then get an early night as we have ambitious plans for the following days trek. 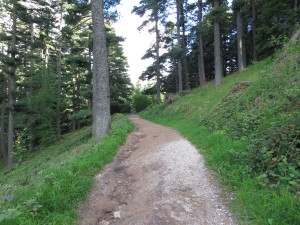 We decide on a circular route taking in Pelister peak.

The paths are steep, but in good condition and the weather report on my laptop (the hotel has really good wifi as we were the only guests at the time) said it would be nice all day. 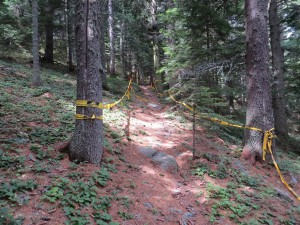 Further along the path, the forest gets denser.

I can see a section which has been used for mountain biking and check for signs that there’s a race on (there isn’t, someone has just left the tape there). 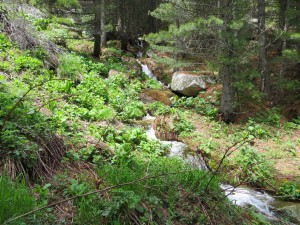 We stop for a break by a nice stream. 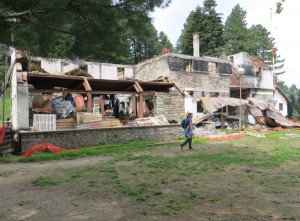 Although we have no map, theres a rough board outside the hotel with basic directions up the mountain.

It mentions a place called Kopanki resort/mountain house. I’ve got the image on my camera, so we head there hoping to get some coffee.

But there’s nobody there and its been practically destroyed by fire. 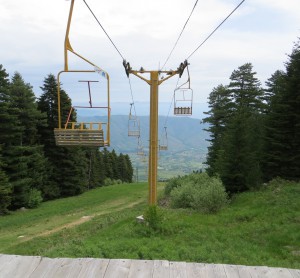 The ski slope nearby. Obviously in summer it wasn’t doing much.

I dont know much about ski-ing, but Nikki said it was quite a short run. 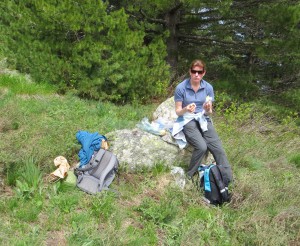 We had been give 2 packed lunches, so we’d carried 1 each.

When we stopped for lunch we realised one of us had all the bread, the other all the cheese. One of us all the apples, the other some disgusting chocolate.

Overall, it was a nice sort of picnic affair and we were both really starting to relax. 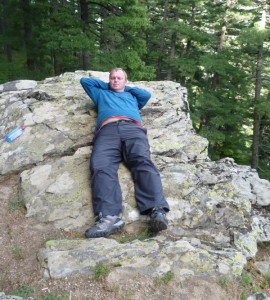 So much so, that I found a comfortable rock and decided to have a rest/nap.

Up to this point, the paths had been in pretty good condition so we got by with cross trainers. 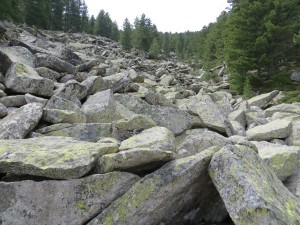 Our stated goal was still the Pelister peak, and the weather was just right for an ascent.

These days the hotel now provide maps, but at the time we couldn’t get hold of one.

We came to these rocks. I was convinced we could navigate around them, but without a map it would be next to impossible.

Scrambling up the rocks we decided to see how far we’d get. 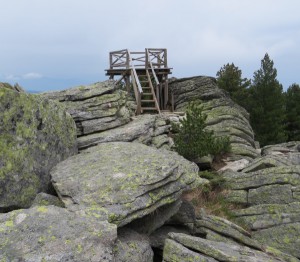 After an hour of exhaustive scrambling, we came to this viewing point.

We decided this would be our peak and we sat on the platform and enjoyed the view and a drink. 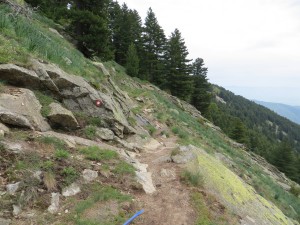 Wandering back down the hill. 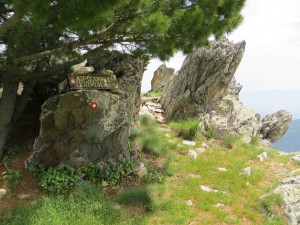 We come to a clearing and this nice rock formations. 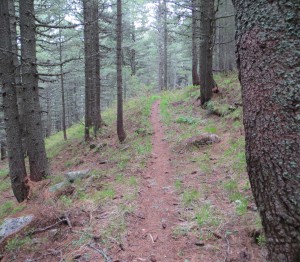 Just as well we retired for the day when we did.

The weather changes quickly as it can easily do in the mountains and were forced to trot down the hill to our hotel to avoid the worst of it. 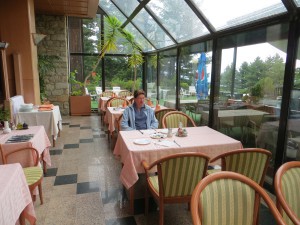 Beer, hot bath and a change of clothes, then down to the restaurant for dinner.

Nikki loved it here, as they had an extensive wine list (although I found it a bit cold and preferred the bar which was warmer, but you couldn’t get any food there).

Overall, a fantastic stay. The following morning we have breakfast and its a taxi back down the hill. 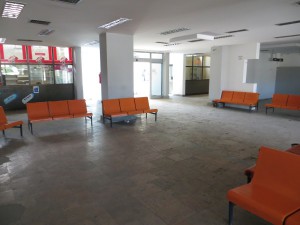 Back to the bus station for our journey back to Macedonia.

I took this picture of the coach station waiting room, as it reminded me of the kind of place I used to sign on near Hague Street when I was 16.