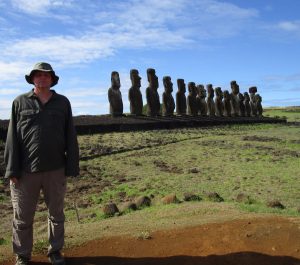 As a youth, I never thought I’d get to travel, but I was always inspired by James Bond and the far away places he went to.

In later life, I got the travel bug, had a reasonable job, so I could travel and see some amazing places.

But even in later life, there were some places I thought I’d never see. Easter Island (otherwise known as Rapa Nui) is one of them. 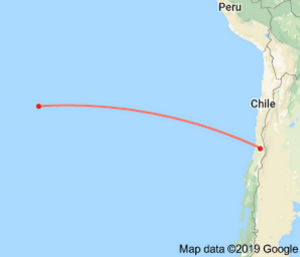 Although it’s part of Chile, it’s 2300 miles from the capital, Santiago. 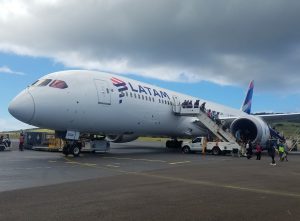 The flight took 5 hours, and I was able to watch 3 films. 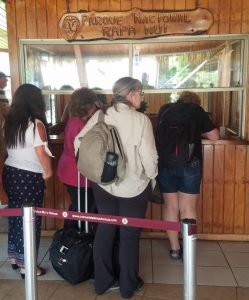 As a visitor, you need to get a permit to stay (maximum of 30 days).

We decided to get one on arrival. You also have to be staying at accommodation registered with the tourist board (so no wild camping). 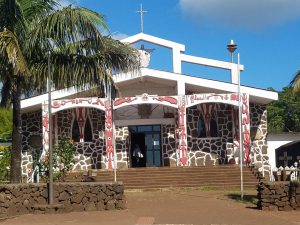 One of only two times (the other one being Corfu) we were able to walk from the Airport to our accommodation.

On the way we had a look around and saw this Catholic church. 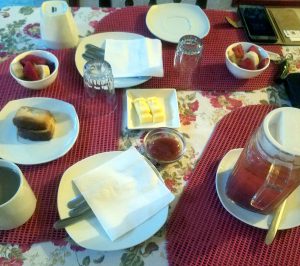 After checking into our accommodation at the Aukara b&b, we wandered down to the beach, had a swim, a few drinks and dinner.

In the morning we had breakfast then a day tour our hotel had arranged for us. 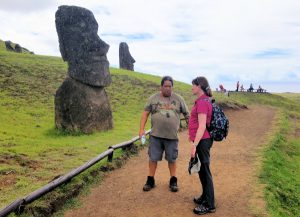 The full day tour lasts from 6 to 7 hours and you can visit the main places of interest of the island: Rano Kau Volcano, Orongo Ceremonial Village, Akahanga Village, Rano Raraku Volcano and Quarry, Tongariki Altar and Anakena Beach. 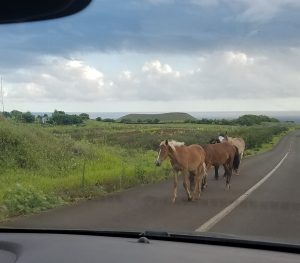 Its possible to tour the island by bicycle (more about that later) instead we travelled around in a 4×4 as there was so much to see and time was limited.

Leonardo pointed at one with a white face. He said it had been a gift to the Island from Native Americans. 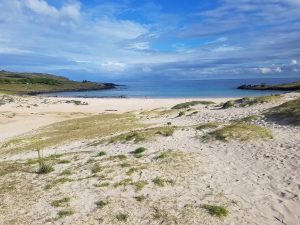 First was Anakena Beach. Right out of Hawai 50. 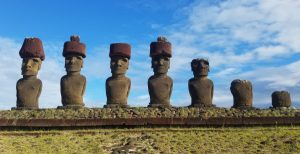 Our first sight of Moa heads “in the flesh”.

Leonardo was passionate about the island and it’s history.

He said the stones are our ancestors. They would be built to face the village so people would know they were being watched over.

He argued that they are not simply statues, but religious artefacts and living things and for this reason, the one in the British museum should be returned (more about that later). 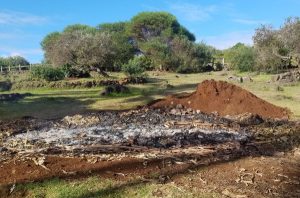 A celebration of some kind was being prepared.

Something I’d read about in the SAS survival handbook, in this case, incorrectly called a Maori oven.

I’d seen one on a bushcraft course in the lakes. You heat rocks by a fire, then dig a hole. Put the stones in the hole, wrap the food in leaves to make parcels, places them on the stones, then cover it all over until the food is cooked.

You might wonder why you’d go to all that trouble. The key is, it requires no cooking utensils and you can cook for 50 or 100 people this way. 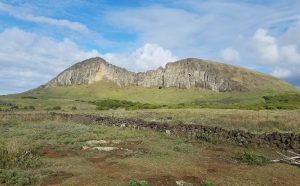 We continue on to Ahu Tongariki.

We park nearby, but before we walk over to see the other Moa, I get a quick photo of this mountain behind us with its clear blue sky.

I was sad that we wouldn’t have enough time to climb it, but it was beautiful all the same. 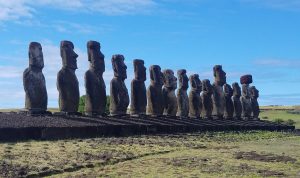 The heads with their backs to the ocean, facing the ancient village. 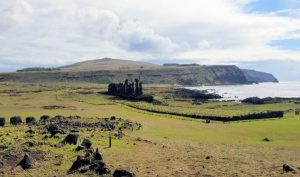 A shot capturing the whole vista. 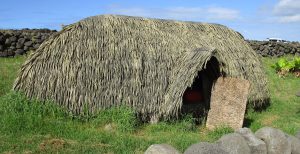 The first settlers arrived in canoes which they fashioned into this basic form of shelter. 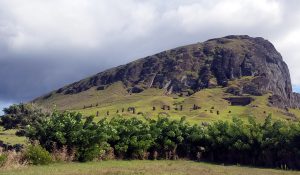 Our next location Rano Raruku.

From this hillside many of the Moa were carved out of the rock, so its nicknamed the head factory. 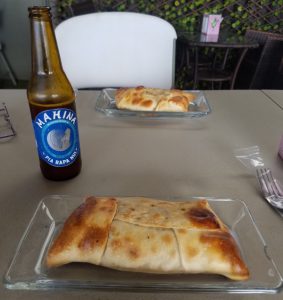 But it’s lunchtime and we decide have some lunch.

A chicken Empanada and a bottle of beer made on the Island.