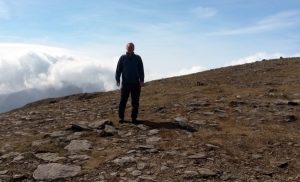 Well, it’s the 5th month of the year, time to get reviewing to do list’s (although you should probably do that every day 🙂

As I write this, I’m about to go on holiday trekking in the Atlas Mountains in Morocco.

Other good news, is I’ve been on a weight loss program and I’ve his my “lost 1 stone” mark.

Bad news, is I had a stinker of a cold which has been really hard to shift.

The month began with the picture above, with me completing another of the welsh 3000 foot hills while out with the walking group. 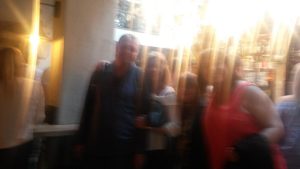 The day before, my friend Julie came down to Chester for the day and we had a fab time exploring pubs around the city.

As we went into the Botanist, there was a small army (and it was a small army, they were team handed) of Moneypenny PA’s out for some drinks. It was fantastic catching up with everyone, the only downside is Julie isn’t terribly good at taking pictures on a phone, so this is how the photo came out. 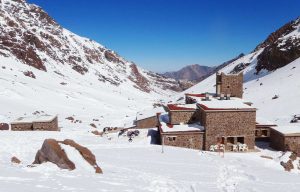 Tomorrow, I’ll be off with those orange uniformed people from Easyjet. Nikki and I are going to Morocco for our yearly overseas walking trip.

Thing I’m most looking forward too, is an ascent of Mount Toubkal. It will be my 3rd ascent above 4000 metres. A modest achievement, but one I’m very proud off.

As I’m going away trekking, I’ve started to convert some of the older trekking pages, that you might find interesting. 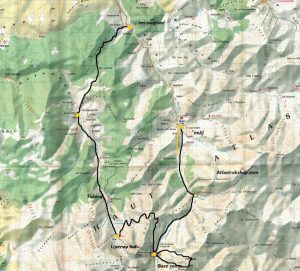 It’s a holiday after all, so its 4 days trekking with 3 nights in gite’s and refuges and the remaining time in Marrakesh, relaxing and seeing some of the new sights there since I went last in 2008. 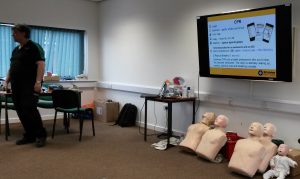 A couple of months ago, I was doing the Fairfield horseshoe and went over on my knee. I landed badly and ended up falling onto my side.

Nothing serious, although my knee hurt a lot, and as my camera was on my belt it took the full force and was destroyed.

At that moment, several people came over from other walking groups who’d stopped on the top and offered assistance. I was surprised at the array of first aid equipment and military grade bandages. I’ve since upgraded my first aid kit, but it left me thinking.

If I’d landed on my knee and broken it, what exactly would I do. I’ve always thought that someone around would know what to do, but what if everyone else is thinking that as well.

As a committee member at the Chester and District walking group, I suggested a half day first aid course.

I’d previously seen the Saint John’s Ambulance station across from the Moneypenny building where I used to work, so I contacted them.

12 places and a 3 hours session for about £240. The training was superb with the instructor Don sharing loads of practical and useful information with everyone (who all really enjoyed it). Nicest thing was, when we ran over, Don stayed for an extra hour to make sure we covered everything we wanted too

If you’re looking for first aid training, I couldn’t recommend them more highly. 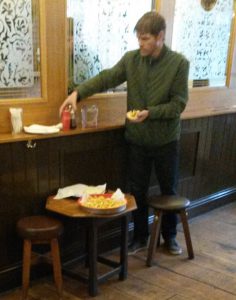 With the training over, I’m still in Wrexham (a place I really like) surrounded by loads of my friends and Nikki.

So we had a few drinks around the town and went to a new Turkish restaurant called Turquoise. Daft name, but excellent food.

Later we went to a pub called the Polish Embassy. I was delighted when the barmaid appeared with several bags of chips and buttered bread.

Its a local tradition apparently, that on Saturday afternoons, there are complimentary chip butty’s for every customer !.

I hope that tradition spreads to Chester. 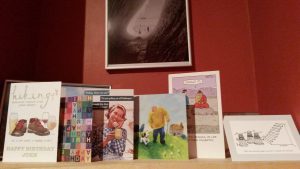 Well, it was my birthday once again, and I got a selection of nice cards and gifts (and loads of texts, emails, fb’s and tweets). 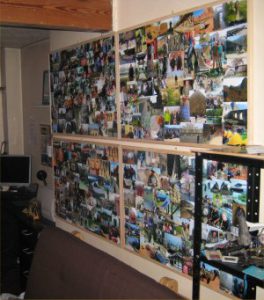 As usual, I opened my memories box and had a look at my photos.

Life has its ups and downs for everyone, but its in moments like these that I realise how lucky I am and I’ve got so many things to feel happy about.

I stopped doing my famous birthday pub crawls last year (they were great fun, but the organising involved was quite stressful).

Instead I had a quiet day with Nikki, and since he was around, my old friend Mike Delafield. 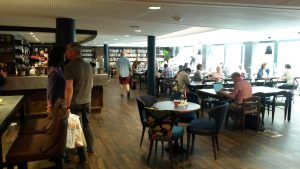 Storyhouse, Chester’s new Theatre, Cinema and Library was open, so we went in there. Okay, hands up. I’ve been critical and sceptical in the past few months, but honestly, its amazing.

We had a full tour if the building and it is spectacular. It’s a starting pistol fired for the re-development of the city.

They sell coffee and wine in the library and they have dozens of travel books so I was in my element. 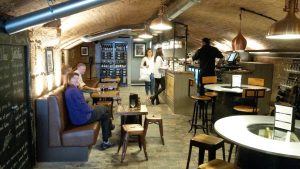 Afterwards we went to Corks Out.

Their wine bar has been closed for 4 months, during building work, which has now finished.

It’s actually really smart, 4 times the size it used to be and now has a dedicated barman. 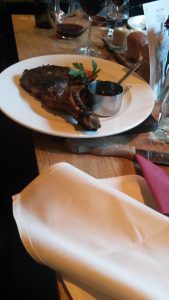 As I bid farewell to Mike, Nikki and I head to Upstairs at the grill for dinner.

It’s quite expensive, but considered the best steak in the city and an ideal once a year birthday treat.

On the next table were some American Aeronautical engineers. We got talking to them and one of them had the steak above, described in the menu as the size of a small tennis racket !. 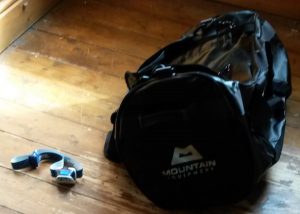 I’ve recently upgraded 2 pieces of gear. The stuff I have I’ve usually owned for years and taken a lot of time to select, so I dont swap things very often.

In this case, my Adidas sports bag of 20 years (which I use for car trips and weekends away) literally fell to pieces so I upgraded with a mountain equipment base camp bag. A bit heavier, but the perfect size, completely waterproof and built for the knocks of airport baggage and high mountain trekking.

The other one was a head torch. The one I had was fine. Lately,Petzle have produced headtorches with selected brightness (if you look around and there’s a tree 3 feet away, it will dim the beam while looking at it). They can also be recharged with USB and you can choose bluetooth to configure its settings.

I like my headtorches simple so none of those features are any use to me. But, the version of the 1 I already have, was released with upto 300 lumens (much brighter than the one I have and ideal for emergency’s) so I bought that too (it also means I have a spare headtorch now. 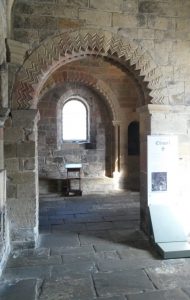 This month saw us go away for 2 long weekends (hence the delay in updating the blog).

Our first trip was to walk Hadrian’s wall. This time we’d built in a whole day to see Newcastle and have a look around.

The picture above is inside the “new” Castle, a really interesting place. There were loads of nice pubs and bars and we had Thai for dinner.

One of my favourite things was the Baltic art gallery. It had loads of interesting things but on the 2nd floor, they had a standard build kit (polythene sheets and stuff like that) that’s issued to refugee’s. They had constructed one inside and you could see what it would be like to live in there.

We had coffee in a nice cafe. With music as its them, they actually had Jazz LP playing on an old style music centre. 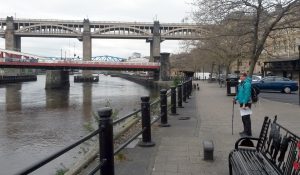 Following day, and we set off.

We walked for several miles along the bank of the river and were passed frequently by joggers and cyclists. 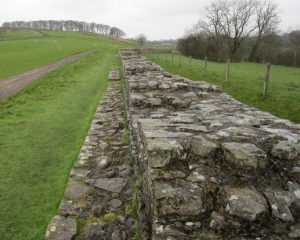 When the Romans left, much of the wall was broken down and used as building material.

The Hadrian’s wall path is basically the route where the wall used to be. In reality there’s not that much left, but we found this bit that was worth photographing. 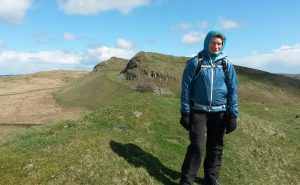 Its a long way, but it was a more leisurely trip as we had more time. It enabled us to visit the Roman army museum and other interesting things like that. 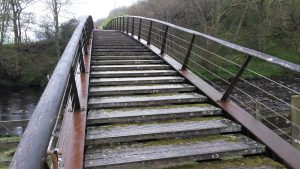 Willowford bridge is made from the same metal as the Angel of the North.

It was put lowered into position by helicopter and made the original site of the wall, fully walkable for the first time since the 3rd century. 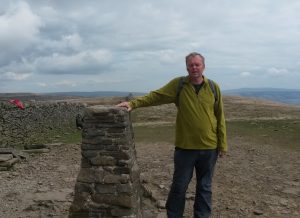 Our other long weekend was a trip to the Yorkshire Dales.

We spend lots of time in North Wales, the Peak District and the Lake District, but hardly ever visit the Dale’s.

We planned 4 iconic walks for the trip, including the one above to Pen – Y – Ghent. 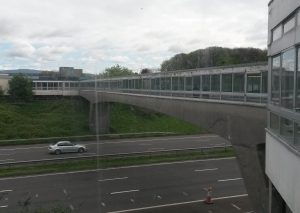 On the way, we stopped at the services to get some coffee.

I remembered that I saw Hugh Laurie on this bridge a few years ago when I was with Frank and Christine on a day walk to the Lakes.

I’ve always regretted not saying something too him, as I’d always enjoyed Blackadder and he was my favourite character (and what we didn’t know then was he would return to form in House). 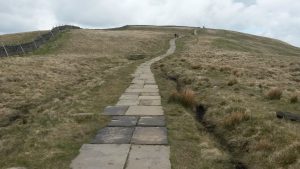 We went up a different route to Pen Y Ghent this time.

As its near Horton in Ribblesdale, I tried to meet up with my Uncle John who lives there.

Unfortunately, Uncle John suffers “bank holiday” invasion in the same way Chester people suffer “the races” so he was out of town when we were there. 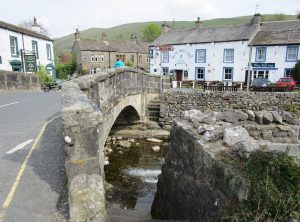 Our base for the trip was a lovely village called Kettlewell.

We had dinner in each of the 3 pubs in the town. I really liked it there, and I’ll be returning. 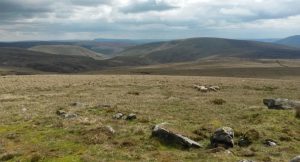 On the final day, we did a circuit around Wolf Crag’s. The view across the valley was incredible and we’ll be going back there before the end of the year.