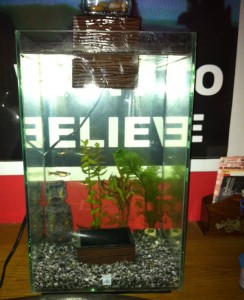 Firstly, apologies for not posting for ages (Is it only me, but it feels like about 6 days since Christmas eve, yet its February already).

At Christmas, I was delighted to receive a fish tank as a gift, from my brother David.

I wasn’t sure if David thought I needed company (Actually I don’t, but if it was company I sought, I’m not sure how much charisma is given off by 4 fish the size of postages stamps).

That said, I like the idea of getting into a new project (the Japanese Garden is progressing well) and so I bought some stones, some plants (both real and plastic) and an Easter Island statue. I was assisted in this, by Sam at Pets at home who very helpfully (and patiently, told me what I’d need).

The bad news, was when I came to actually purchase the fish, they had just received a delivery, and no fish could be released from the tank, that day. Won’t go into the details, but it was 3 weeks before the fish joined the statue, plants etc al.

Well, they’ve been living with me for a week now, and things are going quite well. They seem to enjoy the same sort of TV as me (well, they don’t hide behind the statue, when action or crime drama is on).

I’m told (by the excellent Sam) that my White cloud mountain minnows are usually friendly and peaceful. I certainly enjoy having them around. 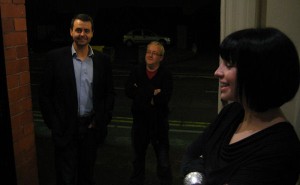 I heard earlier today, that Chris Auty, the managing director of Unitron, is to be promoted, and will be re-located to Canada.

Its the 2nd sad news I’ve had recently, as his lovely wife Mell left Unitron just after Christmas.

I must offer genuine congratulations to David Thornton and the “Young Turks” (Jo, Christine, Gemma, Tracie and Jean) who will now run the Unitron office.

Mell and Chris have never been anything but charming to me (especially when I had just started a new job, nearly 2 years ago) and have always offered encouragement and kindness.

I’d like to send them both my best possible wishes. I’ll miss you.