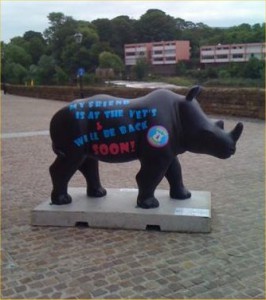 In Chester we have some sort of themed Rhino thing going on. Personally, I think that the Rhino idea is tedious and un-original. I’ve seen something similar done in Singapore and Manchester.

One shop in 3 is closing on the Chester Rows, if this is the best thing the council can think of, to promote visitors to the city, they would do better, to get on with repairing the walls. A farce that they have been closed for a year, considering it was originally constructed 2000 years ago, from sandstone, mud and sawdust, built (like Offa’s dyke) by people using wooden shovels.

That said, why do people insist on vandalising them (like the one above). As stated earlier, I saw a similar project in Singapore, and none of their painted “things” got vandalised (but then you would get 5 strokes with a Rattan cane, shame we don’t do that here). 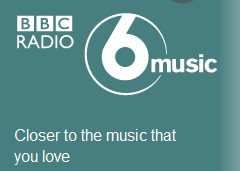 I was pleased to hear the other day, that Radio 6 is going to stay on the air. The BBC had previously argued that most of their listeners, like the content of Radio 1. But that’s the point. Any local radio station can stay in business, playing that kind of content.

The original idea of the BBC charter, was that they would be directly funded. If they wanted to make a documentary, about a story that really needed to be told, the wouldn’t have to worry who would pay for advertising in the breaks when it was eventually shown.

Radio 6 plays all sorts of really good music, and I believe its exactly the kind of thing the BBC is there to create. Frankly, having listened to Radio 1 for 2 days when helping Glenn at Antique Pine Imports, I think they should take Radio 1 down and put Radio 6 in its place.

On the subject of BBC, their news website, is consistently one of the 10 most popular sites on the internet (that’s no mean feat). They recently re-modelled it into a sort of magazine format. Reading it the other day, I read this disturbing story about a bloke in Dubai, who was broke, but had his passport confiscated, so couldn’t leave so was living on the street. Dubai. All that glitters isn’t gold. 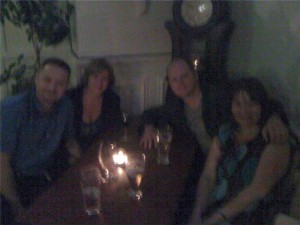 Well, the last couple of weeks have been pretty busy, recovering from sickness,travelling to visit friends etc.

Met up with Caz and Yvonne the other Friday, and Lee and Susan came as well. Every time I visit Manchester now, its changed a bit more. I cant believe what they’ve done with the Brunswick.

Talking of meeting up with friends, I finally finished migrating the interailing pictures over. They don’t really have a narrative (it was years ago now) but I think some of the pictures have a charm that tells a story all of its own. You can see them here and here.

This weekend, I took Friday as holiday and decided to just relax. I watched a total of 8 films over the weekend.

I took Friday off, and had a long weekend. I watched, Splice, Wolfman, Solomon Kane and the A Team. I also watched 8 episodes of the Sopranos (season 4 is really good).

In other TV Stuff, White Collar season 2 got of to an unconvincing start. Eureka blew me away, what I fantastic plot twist, right at the beginning. True Blood season 3 continues to be mediocre.

Recorded the new series of Sherlock Holmes. Its supposed to be set in the present day (they tried that with Jeckyle, and look what a mess they made of it) worst, after all the fuss, it turns out there are only 3 episodes to watch.

The changing role of Superhero’s. 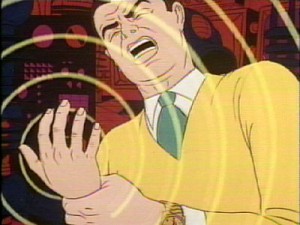 I tidied my house completely on Thursday evening. As many of you know, I hate chores to migrate into the weekend, I’ve never felt that was what weekends are for. I saw a dead spider while cleaning the house. I carried it to the bin, for a descent Christian burial, but on the way, I wondered for a moment, what would happen if the spider was just sleeping, and woke up and bit me.

Would I have a fever all night, and weird dreams. Would I wake in the morning able to climb walls, and and fire webs of goo, that nobody would ever clean up, yet the next day, when I was swinging through the city, would all seem to have gone.

Anyway, made me wonder. Does the superhero premise still work, in these modern times.

I mean, you always have images of a team of bank robbers being thwarted by Spiderman. Wouldn’t Spiderman himself, be breaking into the vault, stealing the bonuses of high flyers, and giving the money to low ranking bank staff who had been laid off.

Equally, instead of the Fantastic 4, stopping criminals from stealing priceless art collections from museums, be more likely to use the GPS system in their Fantasticar to find out where Fred the Shred lives, steal his paintings, then sell them and use the money to buy Christmas gifts for the children of his recently-made-redundant workforce ? 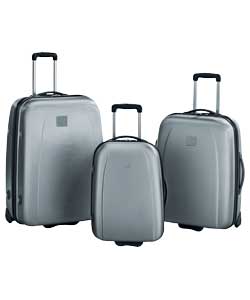 After much thought, I’ve reached a decision. Pull-along luggage is  the worst invention ever created. Forget nuclear bombs, the gun or man made viruses, this device has created far more misery than all of the above put together.

Pull it along through the station fine, but then listen to sighs and gasps of annoyance, as we all stand behind you in the rain, while you can’t lift the thing (that you’ve over-packed) onto the train.

Alternatively, try pulling 2 at the same time across an airport waiting lounge, tripping people up, knocking over tables as you go.

Far simpler, why don’t you just take a bag. If its too heavy to put on your shoulder, then you’ve packed stuff “just in case” that you don’t need.

This week I hate: All my recycling facilities are less than 100m from my house. Why have they moved the can collector nearly a mile away !.

This week I like:  A program/internet app, called you send it. Recommended by the excellent Mell from work, it allows you to send massive files to people, they receive an email with a link that they can easily download. Brilliant invention.

Another brilliant thing I read was in The money diet, the book by the Money Saving Expert. While growing up, mum used to always say to re-fill the kettle, for the next person that wants a drink. Now, I completely empty my kettle, and fill it up, by filling the correct number of cups required with water.

One cup of tea, takes less than 30 seconds to boil. Efficiency, in both cost and time.

Congratulations to Matt Bridges, who has moved out of Chester, and now lives on the Wirral.

One final thing, I’ve had it with Facebook. I’m removing my friends and decommissioning my account (so please dont be offended, if you’ve been dropped as a friend, I’ll still email you. I’m just going to use Facebook, as I used to use Friends Reunited (remember that) to find people I’ve lost touch with.

Near and far, best wishes. The search for adventure continues…

Sorry that the website hasn’t been updated recently, I’ve been really ill now for 4 days. I also left my IPhone in Manchester, so haven’t been contactable since then.

I’ll be up and about tomorrow, and back at work. Next time, I will make sure I have a print out of all my mobile numbers.